A year-long study has found that people with a learning disability in Wales, and their families/supporters, experienced a multitude of negative effects during the pandemic. 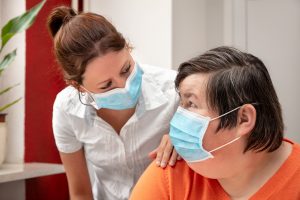 While the general population experienced lockdowns and isolation, the final report of the Welsh Covid study has found that the effects on people with a learning disability have been significantly more profound.

These negative effects have included reduced services and support, including many people denied an annual health, which has in turn added more pressure on to family carers; increased anxiety and loneliness; and a severe reduction in social activities and relationships.

The final report of the Welsh study highlights a need to address three immediate concerns:

The report and an easy read version can be found here.

Funded by UK Research and Innovation, the Welsh study is part of a wider project researching the impact of the pandemic on people with a learning disability across the UK. In Wales, research teams from University of South Wales and Cardiff University have conducted the study, with support from Learning Disability Wales, All Wales Forum of Parents and Carers, and All Wales People First.

Wales was well-represented in the study with 173 people with learning disabilities taking part in the third round of interviews and 56 family carers or support staff completing the online survey.

The demographic of people involved in the study in Wales is as follows:

Findings of the Welsh study

Below is a summary of the final report and its findings.

In January 2021, 68% of people with learning disabilities in group 2 and 55% in group 1 reported they had underlying health conditions, such as asthma and epilepsy, that made them concerned about catching Covid-19. At the same time, about 30% of people in both groups said they had recently been tested for Covid-19, with one in five of those testing positive. This was higher than reported for the wider population.

In December 2020, 89% of group 1 and 73% of group 2 reported wearing a mask when out. In August 2021, 72% of the whole study group said they thought that mask wearing and social distancing should be maintained even when restrictions were lifted.

The impact on people’s health

Impact on well-being of people with learning disabilities

One person said: “I’d like to go out again without worrying about dying and giving people coronavirus.”

The study found that restrictions on visits from family or friends were imposed on people living in supported living or care homes. It is acknowledged that care and support services worked hard to adhere to the rules and keep people safe. However, decisions about going outside or receiving visitors were often made without involvement of the person themselves. For some, these additional restrictions continued after the general public were able to live with fewer restrictions, due to a shortage of support staff or blanket rules and risk assessments within services.

The impact of visitor restrictions had a detrimental impact on the well-being of everyone, especially those with a severe learning disability. This highlighted the need for a different approach to be taken if similar restrictions are imposed in the future.

The study found that people with a learning disability received reduced care and support during the pandemic. There was also a big reduction in the number of people who were able to access day services. In August 2021, a third (32%) of people with a learning disability who received support from services said they were receiving less support than they had done before the pandemic. For people with more severe and profound disabilities this increased to 48%.

This situation not only had a significant impact on people with a learning disability, many of whom were unable to meet up with their friends outside of the day services, but for family carers as well who had to continue providing care during the day when their loved ones would normally be attending a day service.

One person said: “I am chatting more to my neighbours, and I am feeling more confident in talking to the people who live close to where I live. I think I have now met all of my neighbours since the pandemic started. My neighbours have also been helping each other out when people have needed it.”

Only 33% of people in group 2 used the internet compared to 92% of group 1. Not everyone was able to use the internet independently or whenever they wanted to.

One parent highlighted the impact of not being able to see her son, who lives in supported living, on her and the rest of the family: “He needs constant reassurance that his family love him, need him and can see him. He finds it difficult to engage fully via Zoom. Not being able to see his family in person resulted in his mental health suffering, as did the mental health of his family”.

The pandemic has had a big impact on the well-being of family carers and paid support staff. In addition to this, there was a reduction in the number of people with a learning disability who were able to access day services and respite. This meant that the care of their loved one rested entirely on family carers.

The study asked family carers and paid support staff about the impact the pandemic had had on themselves. In December 2020, 68% said they felt stressed, and in August 2021 it was much the same (71%). At the start of the study 64% said they experienced disturbed sleep, with 60% saying they felt tired and 47% depressed. By August 2021 these levels were similar: 61% reporting disturbed sleep, 78% feeling tired and 43% reporting depression. Only 8% in December 2020 said “none of these experiences” applied to them, dropping to 7% in August 2021.

One family carer said: “My son cannot be left at home safely alone. The main impact has been on me. All the responsibilities are on me.”

A paid support worker said: “The person I support used to have four days a week, now its 2 days every 2 weeks. This means his carer has an even greater workload.”

One in three people in group 1 said they thought their lives might go back to how it used to be in 12 months or more, however most people (42%) said they were not sure when this would happen.

People were asked about what would be important to them if there were to be future lockdowns. There were many ideas but most focused on the following:

One person said they wanted “very small things. Going for a coffee with a friend. I want to go to watch the rugby, but my mum isn’t ready to let me. I want to go back to horse riding as well.”

Learning Disability Wales’ CEO Zoe Richards commented on the findings of the study and her hopes for the future:

“It is clear from the number of people in Wales who contributed to the research that there was a desire from people to share their experience during the pandemic. For most their experience was negative, and people felt that they were further discriminated against because of their learning disability. As we now move to create a better world post-pandemic, it is vital that we acknowledge the challenges and suffering people have faced and that the voice of people with a learning disability along with family carers offers the greatest steer in designing what is next”.

When the report was being written, the Welsh Government was developing the Learning Disability Strategic Action Plan, which outlines how support and services for people with a learning disability will be provided from 2021 to 2026. Many of the things asked about in the study are also covered in the draft action plan. Learning Disability Wales referenced the following findings from the Covid study in our recent response to the consultation on the draft plan:

The following proposals are taken from the easy read version of the final report.

In future health emergencies decision makers need to think about:

An event is being planned for later this year to discuss the findings from the study and future work.