For Pride Month I wanted to talk about my experiences as part of the LGBTQ+ community. It’s important for me to share my story for other LGBTQ+ people who have a learning disability.

My childhood and youth 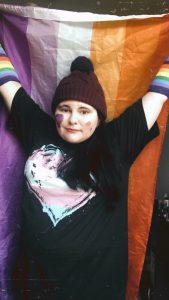 For me this all started when I was very young. When I was growing up, I felt like something was missing in my life, like I was different to the other kids but I didn’t really understand why that was. Instead of playing with Barbies, I played with cars. Instead of wearing skirts and dresses, I prefer wearing trousers and joggers. Sometimes I would need to wear skirts and dresses because of my parents, just to make them happy. I also enjoyed playing activities such as rugby, basketball and netball.

When I was in my teen years things became difficult for me in terms of who I was at school and at home. I started questioning my sexuality and after some time I came to the conclusion that I was bisexual, since at the time I liked both men and women. Coming out to people that I’m bi was a struggle. Some of my friends were being supportive while others were not and they talked behind my back a lot about the situation.

So fast forward to 2020 during the pandemic, I had a lot of time to myself and with my thoughts. I had gone through some personal things at home and had family problems. One day while I was having one of those thought moments, I started to think about some situations when I was growing up and that I still felt the same thing, like something was missing about who I am.

I’ve done some research about the sort of things I was thinking and that was around the time where I started to question my gender identity since at the time, I felt like I wasn’t male or female. It’s like I was in between the two genders, and there’s a term called non-binary that literally means that it’s in between the two ‘main’ genders. Everyone experiences their gender identity in a different way. Not all non-binary people feel the same way. Also it can be a spectrum, like for example some non-binary people can feel slightly towards feminine or masculine. It’s whatever they prefer to be who they are.

Also around the same time that I came out as non-binary, I realised that I only like women and not men. I would say I’m a lesbian since it suits me more than other terms. In terms of my sexuality and gender identity, I currently identify as gender-fluid and lesbian. Being gender fluid means one day you might feel like a man but another day you might feel like a woman. Some days you may feel in between like non-binary for instance.

To this day I’m proud of how far I’ve come and since coming out to my friends and work colleagues, they’ve supported me massively and they’re trying to educate themselves and have a better understanding of what the term non-binary means and some of the other terms that are similar. Doing that makes me feel accepted and makes me more comfortable in these environments.

Thanks for reading! – Taylor (he/him and they/them pronouns)

If you want to talk to someone about being LGBT+ you can call the LGBT+ Helpline at 0300 330 0630. You can find out about more organisations and groups that can support you on the Stonewall Cymru Website.